so i'm more likely to stop keeping this blog up to date.

Thanks to everyone who has been following me here...
Posted by kostis kilymis at 12:58 AM No comments:

(this video contains the truncated teaser version of the work)
Posted by kostis kilymis at 10:55 PM No comments:

some extracts from recent concerts in athens and milan. These are quite different from what i've been doing on past recordings in that they lay bare my recent interest in negotiating a space between the usual feedback explorations and a skewed take on rhythm. File under techno (sort-of)

live by Kostis Kilymis
Posted by kostis kilymis at 7:54 PM No comments:

an extract from a performance with fellow Oxford Brookes MA student, Brett Gordon. This was during the closing night of Audiograft 2012, the school's annual audio festival. We both played sort-of no-input mixing board for the occasion
Posted by kostis kilymis at 5:19 PM 1 comment:

Posted by kostis kilymis at 4:18 AM No comments:

see you there!
Posted by kostis kilymis at 8:41 PM No comments: 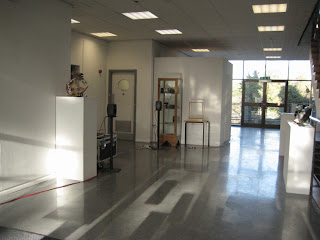 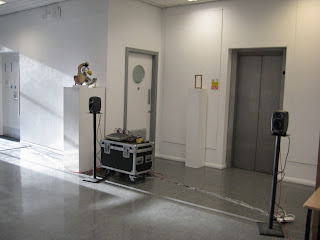 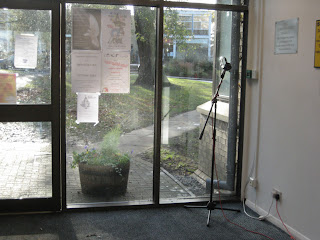 installed 'perspectives' at Oxford Brookes the other day, as part of the MA's sonic art module

'perspectives' uses a combination of acoustic and mixing-board feedback. Sound is fed from the microphones to the mixing-board, where it is routed towards an internal loop, as well as the speakers. The internal loop is also routed to the speakers, creating this way a complex set of interactions between external (acoustic) and internal (electronic) feedback. The aim of this work is to amplify the sounds present in the space (either those coming from inside or near the chosen room, or from people knowingly or unknowingly participating), and to heighten the awareness of the particular environment.
Posted by kostis kilymis at 12:44 AM No comments: 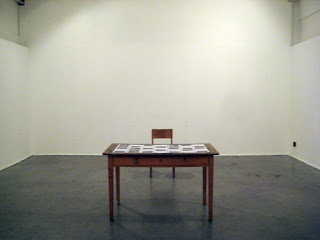 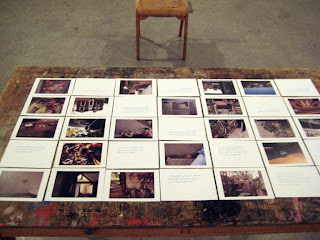 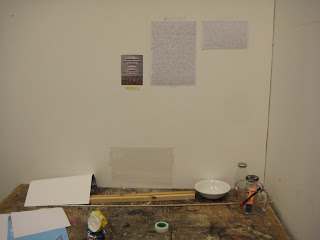 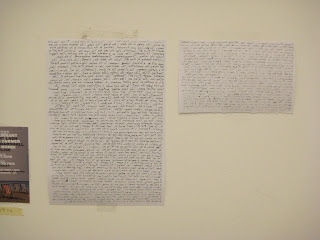 'something like seeing in the dark: an attempt to communicate with Leif Elggren, currently in New York'
paper, ink marker; october 2011
Posted by kostis kilymis at 1:07 PM No comments:

these are also the words found in the url of my tumblr blog, where I've been posting whatever comes to mind or comes through my camera lens for a while now: http://morenoiseahead.tumblr.com/ (some posts in greek, some in english, some contain no words at all)
Posted by kostis kilymis at 9:54 AM No comments: 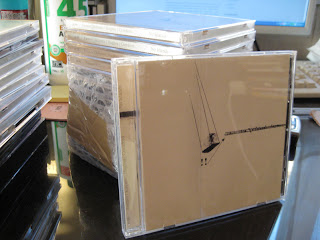 new disc soon on 'another timbre'

the great UK label, Another Timbre, will be releasing by mid-July a cd containing some of my playing. It is a beautiful recording featuring myself, Stephen Cornford, Patrick Farmer and Sarah Hughes, and comprising of two pieces of improvisation and a realisation of John Cage's 'Four6'. The title chosen for the cd is No Islands and it will be part of a series of cds on the same label -released simultaneously- called Silence and After. 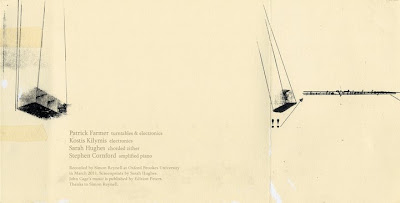 at46  No Islands  |  John Cage’s Four6 + 2 improvisations by Stephen Cornford [amplified piano] / Patrick Farmer [turntable & electronics] / Sarah Hughes [chorded zither] / Kostis Kilymis [electronics]
The music was recorded late March in Oxford by Simon Reynell and for myself it is a great memento from a handful of very fruitful days I spent with Patrick and Sarah back then, working on a bulk of music that walked the fine line between free improvisation and the realisation of open scores.

Many thanks to Patrick & Sarah; Simon for recording and making the music available; Michael Pisaro for the score that he wrote for us but one that we unfortunately couldn't capture in all its beauty; Q-O2 in Belgium; etc, etc...